Something Kinda Midnight Or is a piece for Bassoon and Piano that I wrote for my bassoon playing younger sister’s final University recital.

Something Kinda Midnight Or

It’s the only instrumental piece I’ver composed that has actually been played by other people, and it’s one of my musical accomplishments I’m most proud of.

Here are the silly things I wrote for the programme:

“Something Kinda Midnight Or was inspired partly by a melody I wrote for a compositional exercise at university, and partly by my lazy decision to steal ideas from all the music I had been listening to.

This included, in no particular order, a piece by Hindemith, the heavy metal band Megadeth, and several progressive rock pieces.

The piece has a vaguely rondoish form that intersperses an accessible, regular melody with episodes of angular silliness. In keeping with the progressive rock songs I ‘borrowed’ from, the episodes include frequent time signature changes, and chromatic ‘power chord’ like basslines, the aim being to create accessible music from unusual rhythmic ingredients.

The title doesn’t mean much, except that it made me laugh.

Last Sunlight (a song that Twitter helped to write)

Via @TotusMel on twitter, I came across this steampunk’d guitar.

Isn’t it fantastic? Oh the money I would spend on Steampunk things, if I had it…

Thin Gipsy Thief is, in his own words, “a luthier, furniture designer, and steampunk builder from Vancouver Island, British Columbia. I work full time as a cook in the little town where I Iive and am slowly making the transition to full time Etsy seller and artisan.”

He has an Etsy shop here.

I’ve been playing with my guitar, cubase and my Sonuus G2M midi converter.

Here are the results:

The Inspiration for the lyrics to the sketch I just posted came from an article on BLDGBLOG: 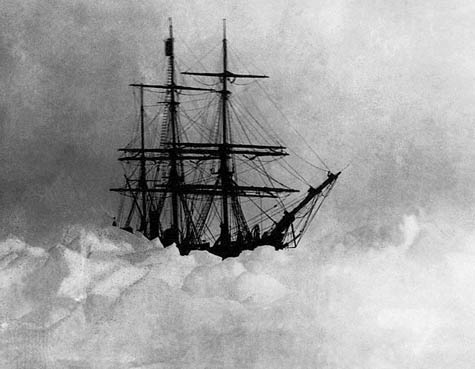 “Back in January 2008, a ship called Tara unlocked from the polar ice near Greenland; it had been frozen in the Arctic floes for a year and four months, repeating the journey of the Fram, a Norwegian ship that once drifted across the polar seas, frozen solid in the ice fields, back in 1896…“

Here’s a sketch for the opening of a song I might write based on it:

Via the Brass Goggles forum, I stumbled across Been Steed’s ‘Distorted Skies’.

I’m listening to it for the first time as I type, and I really like it. It’s very much a ‘mood’ album, all ominous drones, muffled piano and twisting layers. There are some genuinely interesting note choices, for instance at the end of the opening track Time Will Erode Use (I’ll Be Waiting).

Steampunk? In parts. The Conspirator opens with a lovely broken-music hall groove that stays on the same chord for too long (in a very good way), and there’s a sitar intro later on that’s very steampunk in a British Empire, last days of the Raj fashion.

The mix of electronica, piano and distorted vocals on Distorted Skies evokes a wonderfully dark mood and I would heartily recommend it as the perfect accompaniment to the few winter nights we’ve (hopefully) got left this year.

One of the books that has inspired me in my composition is Reginald Smith Brindle’s stuffy, old fashioned, pompous tome ‘Musical Composition’.

I don’t mean that description as a criticism, merely a statement of fact – his written style is old fashioned, and his attitude to popular music, in the few brief passages where it is mentioned, is silly. But as a guide and inspiration to composition, it’s great. The opening chapters on melody in particular are really good, and I love his attitude to harmony.

Little Acorns is a piece I’ve been meaning to write for a very long time. The original melody I came up with at college – that’s about 8 years ago – but apart from a solo violin piece I started and never finished, I’ve never really come back to it.

In the last few days it’s been niggling at the back of my mind, even extending itself a little. So this morning I recorded this little semi-improvised sketch to see if I could get some ideas moving.

‘A Tale from the Endless Stair’, is a bizarre and incredibly violent animation that my brother, Joe filmed last summer.

I composed and recorded the music in one day with Joe sitting beside me, directing things.

The composition process was very quick and very natural. Joe had clear ideas for the music already – a little bit of the theme music for Battlestar Galactica, a dash of the soundtrack for 28 days later – which made things very easy.

Here’s the first part of the film:

The opening theme was built on a simple 7/8 ostinato and some discordant string chords, all played (not very well) on my trusty yamaha keyboard.

The main theme is also based on repeating ostinatos, a doom metal inspired repeating acoustic guitar line that slowly builds in intensity before collapsing into white noise.

The second half of the film sees the Demon finally appear:

A Demon in Metal

The sharp eared amongst you might spot elements of the Comrade Robot song ‘Demon‘ in some of this. Joe has also used Demon over the end credits of the film, the finished version of which should surface soon.

These are both guitar based background loops, the first a moody loop in A minor, the second a more discordant multi-layered affair for the Demon fight.

Composing this music was great fun, and one of my first forays into music for film. I’m particularly proud of the ‘main’ theme which was a real collaborative piece. Most of the musical ideas came from Joe, which I then crafted and shaped into the sounds he was looking for.

The experience has left me wanting to score music for some more films. Quite how I get to do that I’m not too sure yet, but I’ll be working on it over the coming months.

My latest album, Demon, is out now. You can hear it here: